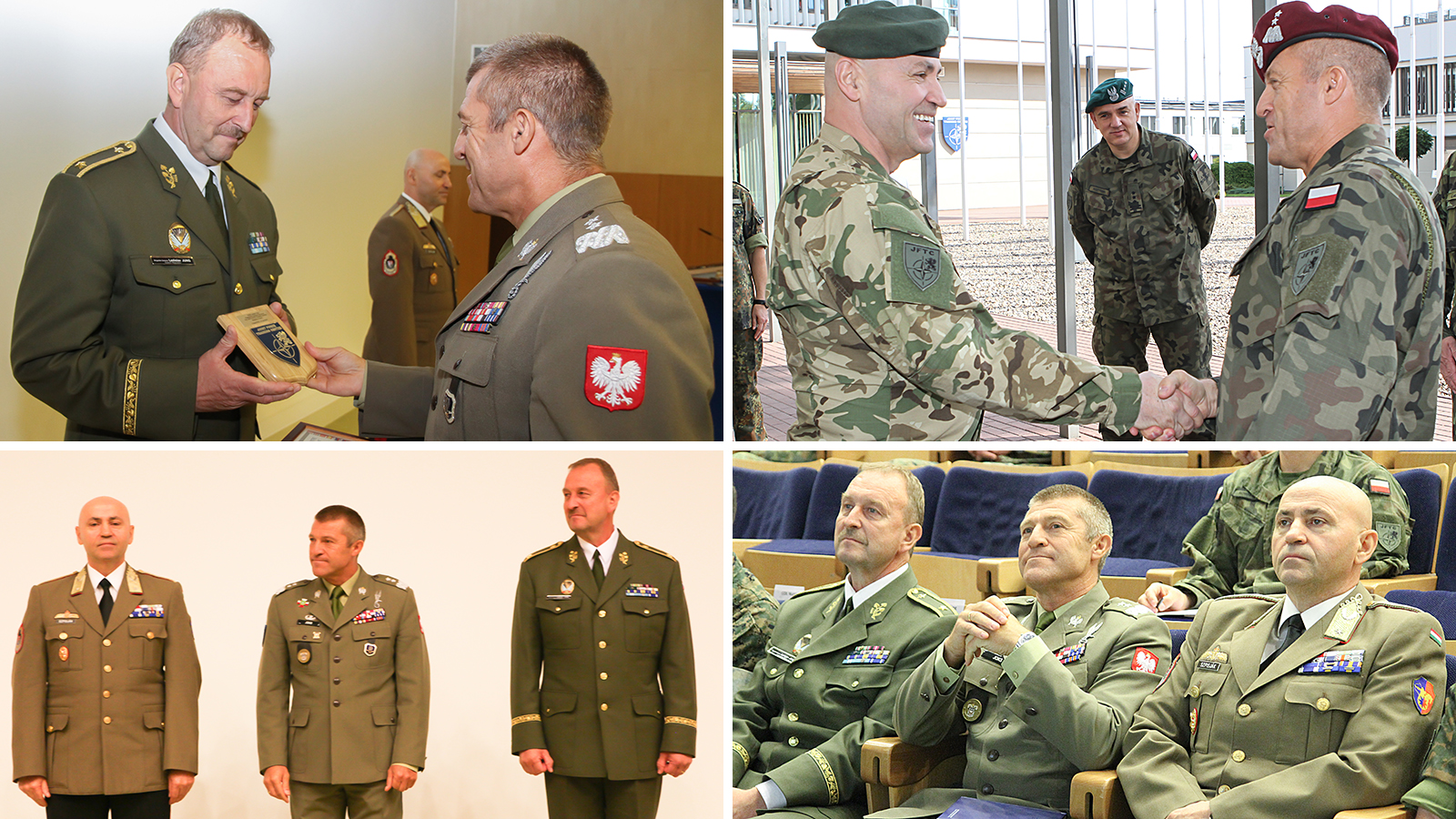 “Ladislav, as the Chief of Staff you may have had the most difficult job in the whole Centre. All the ideas coming from the Commander had to be implemented by you in a staff of seventeen nationalities and even more personalities,” said General Joks in his remarks. JFTC Commander highlighted General Jung’s devotion to the Centre’s mission, especially in the area of training: “You took responsibility as Exercise Director for no less than ten exercises and training events, in- and outside Poland. It was a huge relief for the Commander’s workload and you were always very excited to take on this job.” On a personal note, General Joks also thanked him for the extraordinary support he had received during the change of command period.

Turning to the new JFTC Deputy Commander and Chief of Staff, General Joks added, “Jozsef, your predecessor is leaving significant achievements behind. But as I have gotten to know you in the last couple of days I have no concerns whatsoever. You will pick up speed very fast and I am convinced that the staff will support you in the same way as your predecessor. I wish you all the best, fortune and success with the tasks ahead of us.”

The change of post ceremony was the last opportunity for the outgoing JFTC Deputy Commander and Chief of Staff to address his staff. General Jung thanked JFTC members for comradeship and outstanding cooperation.  “Sometimes it was funny and sunny. Sometimes it was a little bit challenging – but this is normal military life,” said General Jung and added, “The highest value I am taking with me is my very positive experience and that I had a chance to serve in an international environment, with an international staff. Thank you very much for that. It was an honour and pleasure to serve at the JFTC together with you.” General Jung also expressed special thanks towards the Host Nation Poland. “The Host Nation Poland created wonderful and safe environment for us and our families. Thank you for your hospitality!”

At the end of his farewell remarks General Jung turned to the JFTC Commander and to the new Deputy Commander and Chief of Staff, “I would like to wish a lot of energy and patience to General Joks and General Szpisjak so you could bring the Centre to even a higher level.”

Brigadier General Jung will return to the Czech Republic, where he will assume the position of the Land Forces Deputy Commander.

In his welcome remarks, the incoming JFTC Deputy Commander and Chief of Staff, Brigadier General Jozsef Szpisjak, highlighted that assignment at JFTC was an honour for him and that he was looking forward to cooperate with the Centre’s team for the benefit of NATO, “JFTC has strong foundations: trust, teamwork, collaboration. These will be the themes for our cooperation. We are in this together, and we must make the most of it. In the last two weeks, I have witnessed that you are an enthusiastic, results-driven team. You have my utmost trust in your experience and abilities.”

General Szpisjak also mentioned remarkable service of his predecessor and his outstanding contribution in support of JFTC’s mission. “To my predecessor, General Jung, we owe an enormous debt of gratitude. General Jung, I would like to thank you for all you have done during your tour of duty.”

General Szpisjak arrived at JFTC directly from the Hungarian Preparation and Training Command, where he was the Deputy Commander for Hungarian Defence Forces Military Augmentation. In the past, he served in the JFTC’s superior command – Allied Command Transformation.