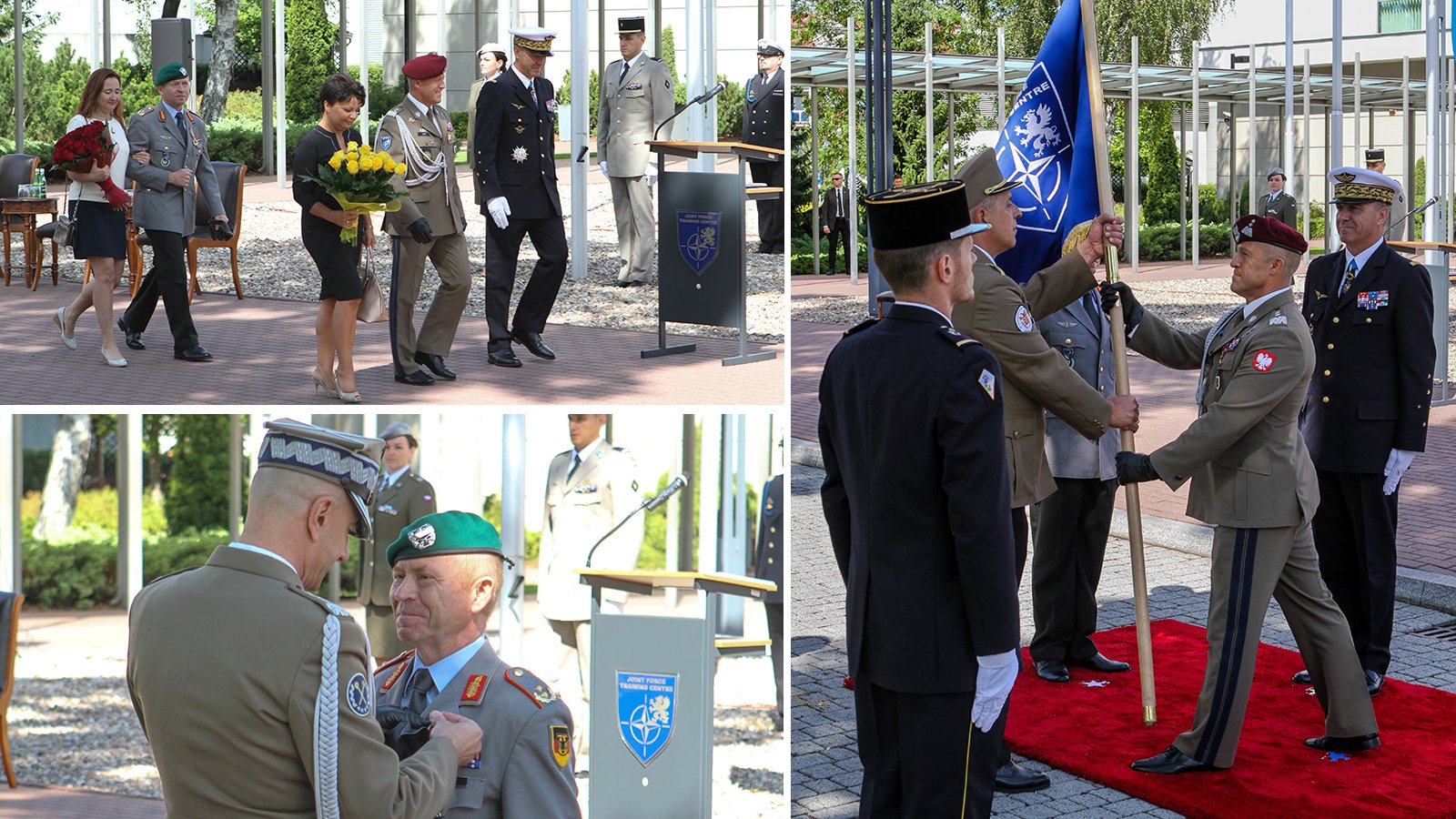 “When we gather to mark the departures of colleagues, it always elicits mixed feelings, especially when we work in such a great environment as NATO. Today is such an occasion, and we have to say goodbye to one of the finest generals I have had the privilege to work with, Major General Wilhelm Grün. In the same time, we say welcome to a new JFTC commander, Major General Adam Joks” – said General Lanata.

Welcoming Major General Joks to the ACT family, SACT expressed his confidence in prosperous future of JFTC under the leadership of the new Commander.

“Wilhelm set high working standards for this Centre, and I trust Major General Joks’ ability to continue to maintain it and work on its improvements” – SACT said, and added: “Major General Joks, I do not doubt that your extensive experience in combat and support units, and your rich educational background, will be excellent assets to succeed to Major General Grün (…) General, I am very much looking forward to working with you,”

“When I took the command of the Centre on 20 July 2016, I mentioned in my inauguration speech that we could not lean back and the Centre had to continue its own development and enhancement of professionalism in order to be the place of first choice for NATO commanders to come for their training before operational readiness or deployment. (…) Today I dare to express, with some pride, that we have been successful in most respects” – said General Grün and highlighted significant achievements of the Joint Force Training Centre during his tenure. The outgoing Commander also underlined that the Centre’s development would not have been possible without the tremendous dedication of the staff and his Deputy and Chief of Staff, Brigadier General Ladislav Jung. “Ladislav, I am completely aware that none of the Centre’s progress and output which I listed before could have been accomplished without the soldiers, NATO civilians and contractors from 16 nations working shoulder to shoulder in this compound under your leadership. (…) You can be really proud of your team.”

In his speech General Grün also expressed his gratitude to the Host Nation Poland, regional and local authorities for all the support provided to JFTC throughout the past three years. “I can only repeat myself and dare to say that other NATO Headquarters just dream of such a support” – said the outgoing Commander.

Turning to his successor, General Grün said: “Adam, your career speaks for itself. (…) I believe I am turning over this Centre at the right time to the right person, who has the right talents, the right mindset, the devotion and the leadership to lead the Joint Force Training Centre to new heights.”

Major General Grün’s accomplishments in lead of the Joint Force Training Centre were recognized and highly appreciated by the Host Nation Poland. During the ceremony, the outgoing Commander was awarded the Polish Army Gold Medal.

Having assumed the command over JFTC from the Supreme Allied Commander Transformation, the incoming Commander, Major General Adam Joks addressed the staff and thanked his predecessor for all his efforts for the benefit of JFTC. “Today I am honored to assume responsibilities of the commander of the NATO Joint Force Training Centre from my outstanding predecessor, Major General Wilhelm Grün. (…) It is remarkable what the Joint Force Training Centre has achieved under the professional leadership of General Grün: the highest quality and standards of work make the Joint Force Training Centre well prepared to meet all requirements and face new missions” – said the incoming Commander turning to General Grün.

General Joks also thanked Polish military leadership for their trust. “I am coming to Bydgoszcz from Warsaw, from the Polish General Staff where I was a deputy to Lieutenant General Rajmund Andrzejczak, the Polish Chief of Defense, who honors us with his presence today. Sir, I do appreciate your confidence in me that was expressed by you recommending me for this important position”.

Referring to the Centre’s broad experience and strong, greatly esteemed position in NATO training, General Joks expressed his conviction that the upcoming years would be very rewarding. “The Joint Force Training Centre is ready to meet new NATO challenges and implement new NATO defence strategies. General Grün has demonstrated an excellent example for me to follow, and I am ready to lead the Joint Force Training Centre forward along this path to achieve more success as NATO’s vital adaptation process continues” – said the new JFTC Commander.

The Letter of the President of Poland

The event attracted attention of Polish President, Mr. Andrzej Duda, who addressed both Commanders in a letter read out by Major General (ret.) Romuald Ratajczak.

Addressing Major General Grün, the President stated: “I wish to express to you, Sir, my profound gratitude for the period of the last 3 years during which we had the honour of hosting you in Bydgoszcz. (…) Under your Command, Sir, JFTC has maintained its high level of professionalism in terms of its education and training activity. (…) Thanks to your experience and attitude, Sir, the training for operations, certification and exercise was conducted in a solid and professional manner, whereas the achieved results allowed the highly qualified staff from NATO countries to expand their potential.”

Turning to Major General Joks, the President said: “I am convinced that you will live up to the challenge of the high standards set by your predecessors. Standing at the helm of the NATO structure, you will also serve, Sir, as Ambassador of the Republic of Poland and of the Polish Armed Forces in contacts with our allies and partners. I believe you will accomplish that mission with flying colours.”

Numerous VIPs representing both military and civilian authorities arrived at JFTC to bid farewell to Major General Wilhelm Grün and to welcome Major General Adam Joks. His Excellency Mr. Rolf Nikel, German Ambassador to the Republic of Poland, Lieutenant General Rajmund Andrzejczak, the Chief of the General Staff of the Polish Armed Forces, Mr. Rafał Bruski, the Mayor of Bydgoszcz, General Erhard Bühler, the Commander of the Joint Force Command Brunssum, Mr. Józef Ramlau, the Deputy Voivode of Kujawsko-Pomorskie Region, Mr. Zbigniew Ostrowski, the Deputy Marshal of Kujawsko-Pomorskie Region, and many other JFTC friends and partners extended their congratulations and wishes of success to both Commanders.

Before assuming the command over the Joint Force Training Centre, Major General Adam Joks had served as a Deputy Chief of the General Staff of the Polish Armed Forces. Click here to read Major General Joks’ bio.